What is Oregon Hiding?

What is Oregon Hiding and Why Is Douglas County Cooperating?

Terry Noonkester
Deborah  Scroggin, the Director of the Elections Division of the State of Oregon, has signed a directive, that if followed by the county clerks, will damage the ability of citizens to monitor elections.  In a directive signed on May 3, 2022, just two months ago, Scroggin has directed all Oregon County Clerks that, if they ‘conclude’,  they may charge fees to redact information from ballot images before the public is allowed to purchase the images.
Director Scroggin cites concerns over upholding the secrecy of the ballot. Ballots are not designed to record personal information, only cast votes. The fees required to search for and redact personal information would be so costly as to deny Oregonians access to these public records.
Ballot images are photos taken as the original ballots go through the tabulators for the vote count.  Each image is stored as an electronic file like PDF or JPG files. Under Oregon Public Records Law, it is a public right to get copies of these electronic files.
Because ballot images are somewhat resistant to central tabulator manipulations, they are very important when looking for fraud. If local officials delete the ballot images, disable the imaging feature, refuse to let anyone see the images, or use any other obstructive measure, there is a voting integrity problem.  Any such actions would be equivalent to the blocking of the built-in audit trail that was originally intended to help the public validate the count.  With ballot images, anyone can conduct a recount of an election.

Clerk Dan Loomis explained the reason for the inflated price: “The secret ballot is one of the better-known principles of American democracy.  It is an unwritten agreement between the voters and those that handle their ballots that ensures the privacy of how they voted will be protected.  When there is a signature on a ballot (intentional or not), we have no authority to assume that the voter has waived their right to privacy.  Attached is a directive from the Secretary of State that further ensures Oregon voters have a right to ballot secrecy.”

There is no place on a ballot for a signature.  The county clerks also do not have the authority to decide if a name written on a ballot is to be considered the voters signature or a write-in vote misplaced on the ballot.

The May 3rd directive was presented to an election integrity representative directly after Dan Loomis was asked to supply the law that authorizes him to redact information from the ballot.  It is important to remember that a directive is not a law and is not enforceable as one.  The definition of a directive is;  “An instruction or guideline that indicates how to perform an action or reach a goal.”

Dan Loomis seems to believe it is ok to sacrifice the public’s right to access public records to protect ballot secrecy, a problem that may or may not even exist. How often have we seen the release of ballots result in the doxing of a voter?

Clerk Dan Loomis states that; “In addition to our duty to redact personally identifiable information from this record we also would need to redact how voters voted, if it would compromise ballot secrecy.”

The act of redacting a vote is to deny the election integrity community any way to verify a true count. The Oregon Revised Statutes, “ORS 192.377: Required redaction of certain personal information” does not list a persons signature or their vote as a required redaction.  Redaction was historically used to gain access to information within ‘top secret’ or ‘national security’ documents.  Ballots do not contain information that reach that level of security.

County Clerks are elected by the people of their counties to represent the people while fulfilling the duties of their office.  They are not employees of the Secretary of State.  If there are conflicts between state and county election policies that do not rise to the level of election law, clerks can use their own discretion to allow their county to sell ballot images without redactions.  The directive signed by Debra Scroggin allows for that discretion when it states: “Whenever county elections officials conclude…”.

Election law attorney, Stephen Joncus, has pointed out that fees may be waived or substantially lowered for persons using the ballot images for “public interest”. ORS 192.324 (5) “The custodian of a public record may furnish copies without charge or at a substantially reduced fee if the custodian determines that the waiver or reduction of fees is in the public interest because making the record available primarily benefits the general public.”

The Election Integrity Group of the Douglas County Citizens Coalition is within that statutory definition.  The group analyzes election data and publishes the results to promote fair, honest and transparent elections, and to educate the general public on election issues.

The voters in Oregon lost their ability to check election results through exit polls when the mail-in ballots came into use.  With the exorbitant fees for the ballot images, the public is now denied access to these public records that could fill that gap.

The election integrity community can not accept exorbitant prices that prohibit citizens from obtaining public records.   Redaction of signatures and votes cast on ballots can not be allowed. The county clerks and commissioners will have to decide whether they will support the rights of their constituents to obtain public records.

What is the reason that Oregons’ Election Director does not want the public to have access to the ballot images?  Why is our county clerk cooperating? 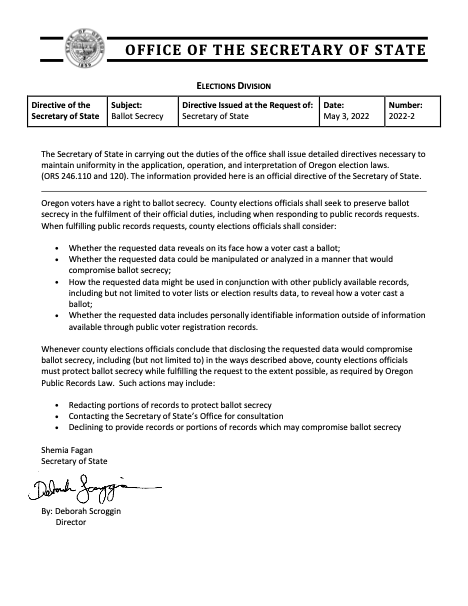 THE DEFINITION OF INSANITY

If you’re asking yourself “Why does this keep happening to us, even though we KNOW they’re cheating?”, then you are insane. The answer is staring you right in the face… NOTHING HAS CHANGED! We do Read more…

As one nearly-certain Republican victory after another disappears before our eyes, our Constitutional Republic is disappearing as well. Many of my closest friends have already given up on any possibility for the reversal of this Read more…

Dan Loomis had a very important article on page 2 in the Beacon last week in which he stated “There is some election misinformation suggesting that voters delay casting their ballots until election day. This Read more…